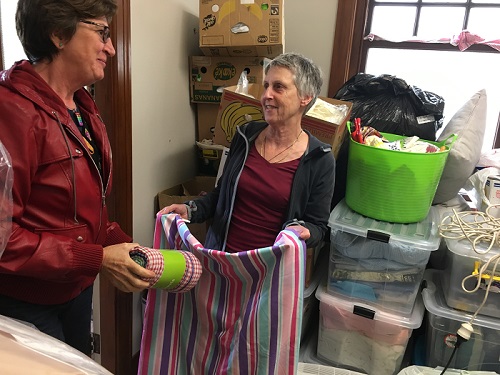 After 10 years with Catholic Social Services, the last four as its Director, Lesley Hooper is retiring from the Archdiocese later this year. She is confident in the knowledge that CSS has grown on its journey and is in the right place at the right time in its new premises at the Soup Kitchen, Tory St, Wellington.

‘Our journey over the last few years has been about rediscovering who we are and revising what we are called to do. We wanted to be more than a services agency, to work around justice through the Justice Peace and Development Commission and make more connections with our parishes.

‘You can see this in our work with helping to settle former refugees arriving in our region. It’s been very rewarding to get our parish communities to collect household items and help with volunteering to set up houses for new arrivals. We also organised a Benefit Impact event with St Joseph’s parish in Upper Hutt to help guide people to better understand their benefits and what they are entitled to.

‘Providing support to people on the ground in Kaikōura after last year’s earthquake, is underway and is another way for CSS to be reaching out.’

CSS has been going for 60 years to work with the vulnerable. ‘Our question is, how do we do that most effectively to support the social changes that have since occurred?’ Lesley says.

‘Pope Francis talks about us going out into the community, going to the margins. That is what we are trying to do in our work. We have a number of professional people who are working with the community and providing support to nurture families.

‘I’ve been working here since 2008 and for me it has been a journey. I’ve been Director for four years and it’s now time to pass on the leadership to the next person to lead CSS on its next stage. For me, it’s been a privilege to work with people on the margins. Over the last four years I’ve been particularly inspired by Pope Francis telling us to do our bit by example. It’s all about the actions we take.

‘The move to our new premises in April to be housed alongside the Compassion Soup Kitchen has been the right thing to do. The Soup Kitchen invited us to join them. Everyone at CSS loves being here and it is working for the Soup Kitchen as well. Already we are making good connections with people who come to the Soup Kitchen – and we can only go forward. Places where the most vulnerable are is exactly where Pope Francis tells us to be.’

CSS Director passes on the baton
+ Text Size -
Do NOT follow this link or you will be banned from the site! Original generation time 2.0436 seconds. Cache Loaded in: 0.0005 seconds.