Catholic Social Services has been working closely with Red Cross and other church groups to set up homes for new refugee families arriving in New Zealand. CSS Director Lesley Hooper introduces these stories from Gemma Snowden of Red Cross about two families settling into the Wellington region.

We continue to witness, through media reports, thousands of refugees fleeing war-torn Syria. In October 2015 Cardinal John Dew, representing the New Zealand Bishops’ Conference, along with the Anglican Bishop Philip Richardson, spoke about how we could collaborate nationally and locally with the existing refugee agencies to welcome more refugees to New Zealand.

Since February 2016 we worked together preparing homes for families arriving to settle in Wellington, Hutt Valley and Porirua. Hundreds of people have been involved. Our parish communities, along with those from the Anglican and other faith communities, and other organisations, have helped by collecting household items and setting up the homes. In February we set up some 25 homes for 90 former refugees, mostly from Syria. The generosity was overwhelming. By August we have set up 138 homes for former refugees from countries like Syria, Colombia, Iran, Afghanistan, Myanmar, Sri Lanka, Iraq, and Palestine. Our parish communities, other faith communities, schools, and many other groups and individuals, have donated household items, money, and their time to help set up the homes ready for the families arriving in Wellington.

It has been wonderful to hear from Red Cross, stories of joy from the families when they arrived in Wellington to welcoming homes created for them through the kindness of so many people from the churches and general community Here are two of their stories. 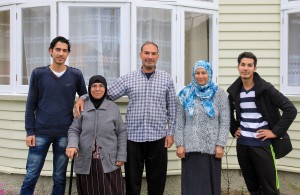 Mohamad Eid Morad and his family are from a town called Darayya, near the Syrian capital Damascus. The area’s been under siege since 2012.

Before the war they lived a comfortable life. Mohamad worked as a contractor and the children went to school. Then they were forced to flee.

They ended up in Lebanon where it was difficult for Mohamad and his wife Imane to find work. Their sons, Diaa and Ahmad, soon had to abandon their schooling. The family languished there for three years, unable to continue their lives.

The four of them, along with Mohamad’s mother Gazala, arrived in New Zealand as refugees in March 2016.

‘The people in New Zealand are wonderful,’ says Imane. ‘They are nice; they welcomed us, helped us with the house, and showed us how to enrol in school.’

The family says volunteers have made transitioning into life here much easier. They feel settled and have started to live their lives again.

Imane enjoys cooking and lays out a table of delicious homemade Syrian treats while Mohamad talks about his hobbies.

He’s a fan of bodybuilding and swimming. Mohamad says he’s even been invited to play a game of rugby in his local community.

Eldest son Diaa is a keen scientist and wants to study medicine. The talented 20-year-old won a prestigious award called the Syrian Scientific Olympiad before the family was forced to flee.

Language has been a huge barrier for the family as English is their third language. Imane and Mohamad have struggled but are attending classes every day and are picking it up.

Their children’s language skills are impressive. Ahmed is enrolled in the local high school and Diaa is hoping to finish Year 13 once he’s finished his English course.

Mohamad’s mother, Gazala, is often at home alone while the rest of the family attend their lessons. Without a support network, it can be isolating for her.

The family is looking ahead with positivity. Both parents are hoping they’ll grasp the English language and live peacefully in New Zealand. Imane is also certain both her sons will become successful doctors.

Mohamad, who owned a farm in Syria, has started a vegetable garden that he and his mother tend daily. He proudly shows off the growing produce while explaining their plans for the garden’s future – bountiful olive trees in the back, a bed of beautiful flowers around the side, and a canopy of grapes over the front.

It’s easy to see this house has become a home for the family, where they feel emotionally settled and look forward to what the future holds. 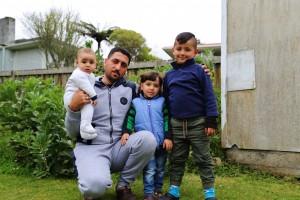 Rami Abduljawad took his family and fled their Syrian home in 2014. Originally from Idlib, Rami made the decision to leave after he was detained and tortured.

The family escaped to Lebanon and called Beirut home for the next one-and-a-half years.

Rami and his 15 family members were forced to live together in a three-bedroom house, unable to find work and with few educational opportunities.

Rami experienced even greater tragedy when his wife was in a car accident while pregnant with their second son. Doctors managed to save the baby but couldn’t do anything for his wife. Baby Karam is now an energetic two-and-a-half-year-old.

Following the accident Rami was approached by UNHCR and registered as a refugee.

His refusal to leave without his parents and siblings meant it was a year-long, uncertain and drawn out process for the family to find a resettlement location. Medical records had to be retrieved and security checks made.

The silver lining was that Rami met his second wife Mariam during this period. They fell in love and got married.

Eventually the family received the call they’d been waiting for.

No one in the family knew much about New Zealand but they were happy to be leaving Lebanon.

‘A huge burden had been lifted from our shoulders as soon as we left the airport,’ Rami says, ‘we could finally start our new life.’

Rami and Mariam are excited at the prospects their life in New Zealand hold.

‘I’m happy because my children will have a good future in New Zealand and will be able to learn English,’ says Rami. ‘I’m looking forward to getting into the workforce.’

The English lessons aren’t easy for Rami but he’s persevering and wants to find a job as a mechanic or a barber.

Mariam started her English lessons in October. She’s advancing well, having learned English in Syria, but says the Kiwi accent is proving a little difficult.

Rami and Mariam are happy to have their extended family nearby too, saying it’s made settling in much easier.

Refugee Stories
+ Text Size -
Do NOT follow this link or you will be banned from the server!